50 Melodies for the Medieval Bagpipe - Volume 1 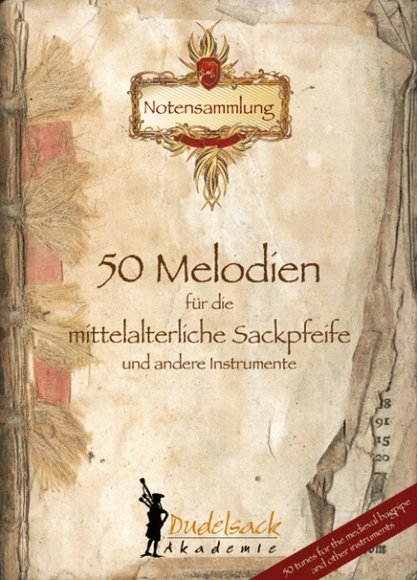 Price
€ 19,90*
$ 24,27
1 item
* including VAT plus shipping
Stock
not on stock at the moment
Availability on request
This Article is currently not on stock. Please enter your mail and we will notify you when the product is back on stock.
Description
Additional Informations
Reviews
Query on the Item?

As a follow-up to the Sackpfeifen-Fibel, the first and only tutorial for the medieval bagpipe, comes now a new music collection that provides the musician with a fresh repertoire and new ideas.

The idea for this collection for widespread instruments comes from Brian Haase (FABULA) and Thomas Zöller (formerly Estampie), who teach together at the Dudelsack-Akademie founded by Thomas. The often criticized lack of good material gave both of them the idea to take matters into their own hands and combine their own playing techniques and musical ideas.

In this book, the authors present not just a collection of interesting and suitable music for the bagpipe, but also background information about the pieces, references to the composer and geographical references as to the origin of the music. Almost a year of material was collected, pieces here and there arranged, and input sought from colleagues who offered advice on certain aspects of the repertoire.

The first volume of the collection now includes 50 melodies for the medieval (market) bagpipe. They mostly come from the traditional repertoire of Brittany, Ireland, Italy, the Balkans and from Scotland. As well, there are songs from the Cantigas de Santa Maria and new compositions from both of the authors and other musicians.

The entire repertoire was recorded, as with the Sackpfeifen-Fibel, by Thomas Zöller and Brian Haase and can be accessed anytime, for listening and playing, online.