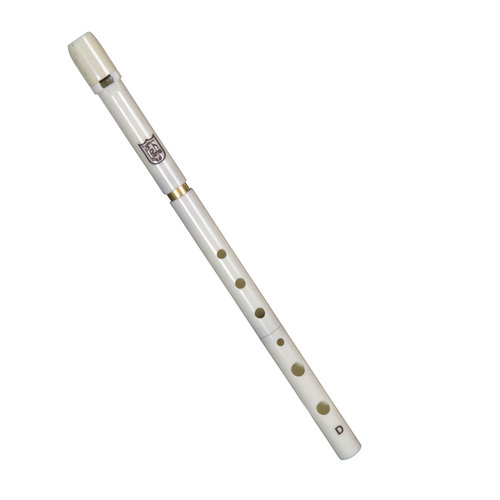 Price
€ 89,00*
$ 92,23
1 item
* including VAT plus shipping
Stock
not on stock at the moment
Availability on request
This Article is currently not on stock. Please enter your mail and we will notify you when the product is back on stock.
Description
Additional Informations
Reviews
Query on the Item?

A great sounding, almost indestructible whistle, you can take with you anywhere. The idea for this instrument came to Carey during a kayak camping trip on a small beach in the Florida Everglades.

Parks Every Whistles are particularly light tin whistles made of plastic with outstanding playability. In terms of loudness, they move about in the middle realms, but are easy blowing instruments. Regarding the tone ring developed by Carey Park, it not only regulates the loudness, but also the extra air pressure needed to jump to the higher octave.  Due to the curvature of the mouthpiece, very little moisture gets into the whistle. The instrument is easily cleaned with soap and water. It does not rust or tarnish. The tuning slide requires no cork grease. In contrast to the regular Every Whistles, the Walkabouts are in three parts!

The tuning and response of a whistle is a matter of taste. Some players appreciate a only slight change in needed pressure to reach the higher octave, others perhaps find comfort needing more pressure. With the help of the Tone Ring the pressure required to reach the next octave can be regulated.

In the middle position the pressure needed to reach the higher octave is increased and the lower octave sounds stronger and more present.

If you continue to rotate the ring, so that only a small gap of the window is opened below the mouthpiece, the whistle is much quieter. Then, one can practice without disturbing others (Finally, whistle playing all night !!!)

History of these instruments

"I started making whistles because I was camping in Florida and wanted to have one I could take with me and not be concerned about how it was handled. Not only was I camping, I was camping via kayak, on beaches in the Everglades.

You probably have spent a day at the beach sometime during your life. (If you have not, get to it - you are missing something.) Remember how it was impossible for you to keep the sand out of anything? Your food, your hair, any crack or crevice caught some sand. OK, now stick around after the sun goes down. In sub-tropical Florida that means you are now living at the dew point, the sand and water is salty and attracts water. Everything is damp, and sand is everywhere. Repeat for several days. You get the idea.

What kind of whistle could thrive in that environment? One that was virtually indestructible. It didn't take long for me to decide on PVC pipe as the starting point. It is already the correct dimension for some keys, and is easily worked. Both of these attributes allow me to offer them at a reasonable price.

As materials go PVC is the modern version of tin. It is inexpensive, easily worked, and widely available. Whistles should be made from PVC today. Not exclusively, but they should be available.

The magic of the pennywhistle is not so much in the material, as Glen Schultz proved with his wonderful Water Weasel whistles made from drain pipe.

Complex machining adds to the cost so I have tried to keep these whistles simple to make.  My whistles have no metal parts. Even the mouthpiece block has no small nails. So you can wash the whistle in the dishwasher. In fact, this is the last step before I send your whistle to you. I separate the parts and put each one on its own post - plastic is plastic.

The tuning slide is quite stiff by design. I hate a whistle whose tuning changes while I'm playing. If you prefer a lighter touch when tuning your whistle, just take some fine sandpaper or steel wool and rub on the bit that goes inside the other part until it fits as you like it."